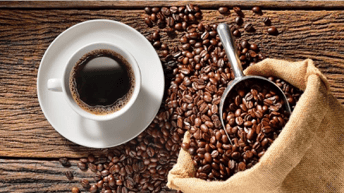 Whether you’re gearing up to get through the last few hours of the workday, or preparing for an evening out, you may find yourself looking through the refrigerator for something to give you a push. Rather than turning to a sugary drink in a gaudy can, you can find all the energy you’ll need to succeed in natural foods and drinks.

Coffee is synonymous with quick and lasting energy boosts. It is a well-known source of caffeine, a natural stimulant associated with improving focus and mental sharpness. Caffeine is also prevalent in tea, which is often a preferred alternative for non-coffee drinkers.

The caffeine in coffee and tea has more health benefits than short-term energy boosts, however. According to an article from Johns Hopkins Medicine, regular caffeine intake through coffee and tea is associated with a lower risk of health issues like type 2 diabetes, heart failure, Parkinson’s disease, and colon cancer.

Of course, because caffeine is a psychoactive stimulant, moderation is important. Johns Hopkins Medicine recommends up to three to five cups a day for women in typical health, though it’s noted that caffeine tolerance varies by person. You’ll also want to be wary of drinking coffee too late in the day — Harvard Medical School suggests consuming coffee in large quantities after 2 p.m. can lead to insomnia.

Breakfast is considered the most important meal of the day, but that can depend on the type of food you choose. A sugary cereal or dense bagel loaded with cream cheese may be quick and easy, but they don’t provide the same lasting benefits as a warm bowl of oatmeal.

Whether you prefer rolled, crushed, or steel-cut, oats are a great way to get carbohydrates early in the day. Oats are slow-digesting carbs, which means you’ll get more sustained energy throughout your morning than you would with a sugar-packed cereal. As Adda Bjarnadottir writes for Healthline, oats are also beneficial in that they’re rich in beta-glucan, a soluble fiber that leaves you feeling fuller and provides better gastrointestinal health.

Though oatmeal itself offers a balanced nutritional profile, you can also enhance your bowl for even more benefits. Jenny Sugar of PopSugar Fitness suggests adding peanut butter or almond butter to increase protein or adding flaxseed to meet your daily intake of omega-3s. You can also get an extra boost of simple carbohydrates by adding fruit like strawberry, banana, or apple or making your oatmeal with milk or a milk substitute rather than water.

There’s a reason the long-held standard for hydration is getting eight glasses a day. Drinking a sufficient amount of water will keep you energized throughout your day, and it can even help curb your appetite.

Arlene Semeco, a registered dietician writing for Healthline, notes water is key for serving several important bodily functions. Failing to drink enough water can hinder these functions, which leads to dehydration. If you’re dehydrated, your body slows down, which might be the reason you feel drained heading into your afternoon meeting.

The Harvard Medical School says the average person should drink between four and six cups of water every day. That number can fluctuate based on how active you are, if it’s a hot day and you’re perspiring, or if you have a medical condition like thyroid disease or kidney problems. If you’re not sure how much water you should be drinking to achieve the maximum benefits, consult with your primary care physician.

If you have a solid nutritional foundation, you’ll be less likely to succumb to the late-afternoon crash and more ready to make the most of your evening after work